Minecraft Dungeons is an upcoming action role-playing, dungeon crawler game co-developed by Mojang & Double Eleven, and published by Xbox Game Studios. Minecraft Dungeons does not have the feature of crafting or building unlike the original Minecraft games, but instead, it focuses on the ARPG, dungeon crawler element where players will explore dungeons that are infested with a variety of enemies.

There is no class system but will heavily focus on creating a build that will suit a player's type of class or playstyle - Minecraft Dungeons was released on May 26, 2020, on PC, Nintendo Switch, PlayStation®4, Xbox One, and Xbox Game Pass. 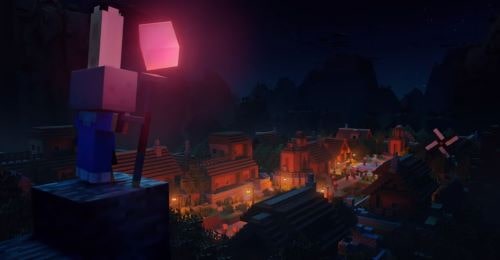 Long ago, in the Minecraft Universe, and the period of adventure and danger, an Illager was shunned by his kin and wandered various lands to seek a new home where he was only rejected and driven away. Consumed by his rage and anger, the Illager wandered blindly to wherever his feet brought him. Until long last, the Illager came across a mysterious temple and found a mysterious artifact that changed his life forever, there, the Illager found the Orb of Dominance and harnessed its power.

Corrupted by evil and driven by vengeance, with his newfound power, the Illager who now addresses himself as the Arch-Illager made sure that those who have wronged him will bow down and serve before him, and if they disobeyed, they would meet their doom. The Arch-Illager then raided the different lands, destroyed the villages and captured the villagers as his revenge and plan to take control of the whole universe - despite the terror and chaos, a hero who is pure of heart, who is strong and brave ventures out on a quest to save the villagers and the land from the corrupted Arch-Illager.

Minecraft Dungeons features a fun and exciting adventure, dungeon crawler experience where players can either explore the dungeons solo or with other players. Apart from that, players also get to create a build for their hero that can suit their preferred playstyle.

Brave the dungeons alone, or team up with your friends or other warriors! Explore the dungeons of up to four players that can battle together online or in couch co-op. Explore the action-packed, treasure-stuffed levels. From swamps, canyons, and mines – all in an epic quest to save the villagers and take down the evil Arch-Illager!

Use melee swings, hang back with ranged attacks, or tank your way through shielded by heavy armour and create your very own character build that will fit your preferred playstyle! Personalize your character and unlock unique items and weapon enchantments for devastating special attacks.

Travel the various landscapes within the Minecraft Universe and discover various secrets, power, and allies that will help you throughout your journey of stopping the Arch-Illager's diabolical plans.