Locations for Minecraft Dungeons feature the different areas that players can discover across the Minecraft universe. Travel through villages, forests, canyons, swamps, and mines as you venture into a quest of stopping the Arch-Illager from spreading chaos. This page covers a list of the locations that are encountered in the game. 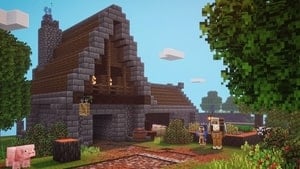 A camp situated on the outskirts of Squid Coast. This serves as the hero's resting area and the main hub where players can select missions, trade with merchants, and train.

Squid Coast is a village in the Overworld that has been seized by the Arch-Illager's army of warriors and the undead. 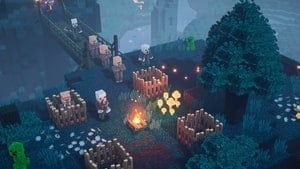 The Creeper Woods features a spooky forest full of skeletons, zombies... and Creepers!!! 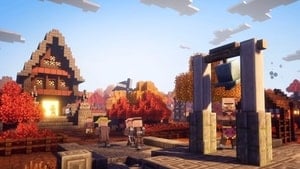 Pumpkin Pastures was once a bright and colorful land that has been burned down by the Illagers. 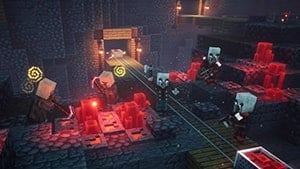 Redstone Mines features a cavern filled with long narrow halls, an area where lava can be seen, and a den where an enchanted creature rests. 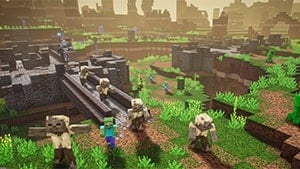 Cacti Canyon features a desert location filled with cacti plants and is inhabited by the Illagers. 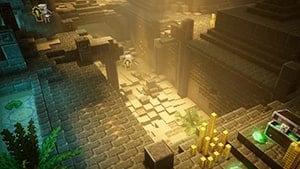 The Desert Temple is a forgotten kingdom that is full of the remnants of the fallen warriors and followers of a powerful necromancer. 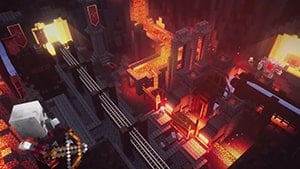 The Fiery Forge is an underground facility where the Arch-Illager's minions construct its army of Redstone Golems. 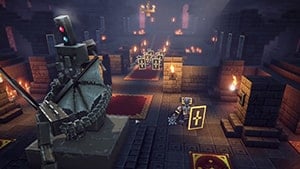 Highblock Halls is within Highblock Castle, the Arch-Illager's abode. The castle is swarming with his army of undead, warriors, and sorcerers. 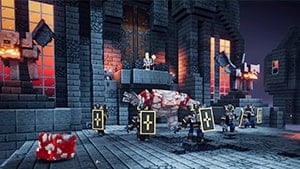 The Obsidian Pinnacle features the top and outer part of the Highblock Castle where more of the Arch-Illager's minions will try to stop you from chasing after him. 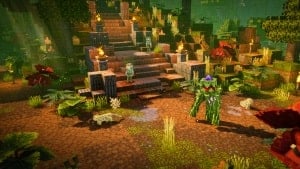 The Dingy Jungle features a lush jungle where the power of the Orb of Dominance has manipulated the environment and turned the creatures and plant-life into hostile beings. This location is part of the Jungle Awakens DLC. 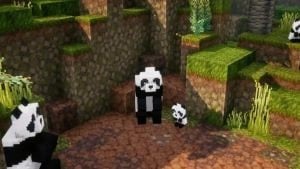 The Panda Plateau is a corrupted bamboo forest where pandas reside, this location is part of the Jungle Awakens DLC. 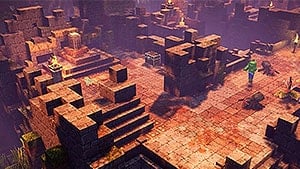 The Overgrown Temple is a location that is part of the Jungle Awakens DLC. It features an ancient temple where nature has overtaken its vast structure - what lies ahead is a horrible creature created by the corruption of the Orb of Dominance. 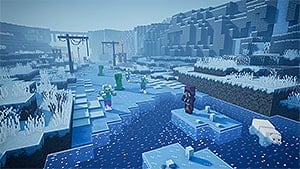 An island that has been consumed by a never-ending cycle of Winter. Icy paths and dangerous enemies attack through the wind and snow.

An isolated fortress seems to be the source of the never-ending winter. Worst of all, from somewhere deep within those lonely ramparts, something terrible screams out with rage and fury.

The Creepy Crypt is a secret dungeon that can be found in Creeper Woods.

Arch Haven is one of the secret dungeons that can be found in Pumpkin Pastures.

Underhalss is a secret dungeon that can be discovered in Highblock Halls.

The Mooshroom Island is the ultimate secret level that's labeled as "???". It can only be accessed by finding all 10 runes that are hidden in the game.

The Lower Temple is a dungeon that features the underground area of a temple.